A Full Day at Pearl Harbor

This tour is a full day experience of Oahu’s most popular attraction – the memorials and museums of Pearl Harbor. Guests will become fully immersed in the events – before, during and after – of that infamous day the Japanese attacked on December 7th, 1941. You’ll spend the day learning and seeing many different perspectives of WW2 in the Pacific. From the multitude of displays and memorials at the Pearl Harbor Visitor Center to a Navy boat ride to the solemn Arizona Memorial to boarding the USS Bowfin Submarine and the WW2 battleship USS Missouri to seeing up close nearly 100 vintage aircraft at the Pearl Harbor Aviation Museum, this tour is THE gateway to experiencing all Pearl Harbor has to offer! 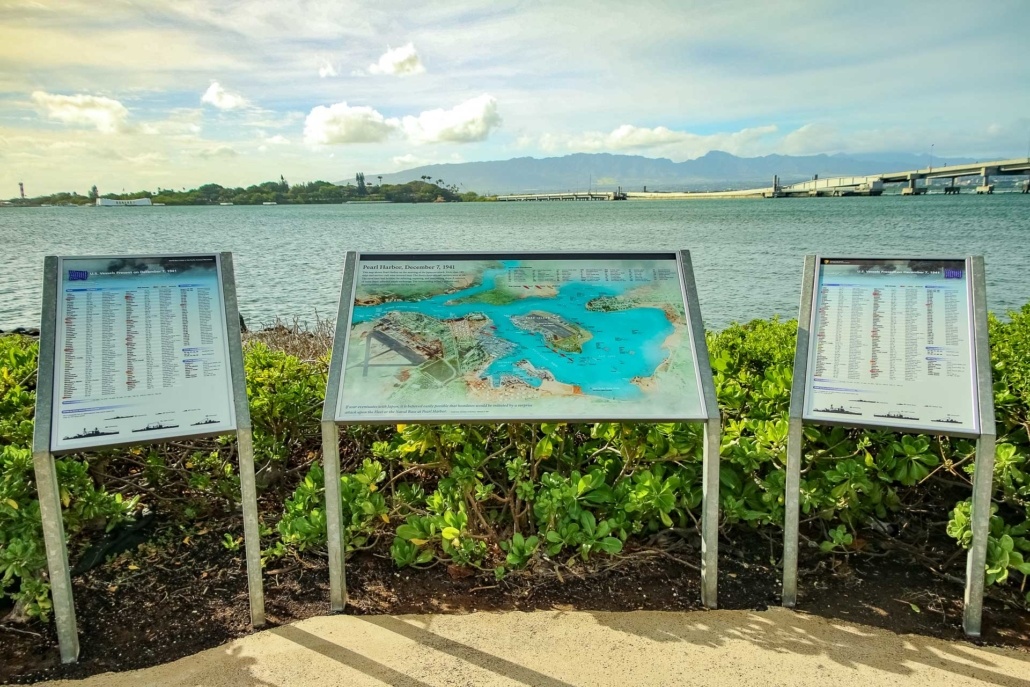 These historic locations throughout Pearl Harbor and Ford Island represent a time in history that changed the world. Learn how submarine warfare became the savior of the Pacific Fleet during WW2. Stand on the deck of the battleship where the Japanese surrendered to U.S. forces in 1945. Explore 120,000 sq feet of military aircraft in hangers who’s windows still bare the bullet holes from the Japanese attack of 1941. Learn how these planes turned the tide of war in the Pacific during WW2, including aircraft used in both the Korean and Vietnam wars.

This tour includes a set of tickets for each of the major attractions at Pearl Harbor which includes the USS Bowfin Submarine, the USS Missouri Battleship and the Pearl Harbor Aviation Museum on Ford Island.

Pearl Harbor is our #1 visitor destination and can sell out on certain days. We recommend that guests book this tour in advance. We also recommend that you book your tour for the 1st or 2nd full day after your arrival. You will likely be up early on those days because of Hawaii’s time difference, making for an early start to a full day of exploring the attractions at Pearl Harbor.

Your safety is our first priority. Sites and features of the Passport to Pearl Harbor may change due to unforeseen circumstances or adverse weather conditions.

Tours & tickets are not available on Dec. 7th. each year.

No-host lunch and snacks are available for purchase at the Visitor Center, at the USS Missouri Battleship and at Laniakea Cafe inside the Aviation Museum.

Dress comfortably for the weather but keep in mind that shoes and shirts are required on the USS Arizona Memorial. Swimwear is not allowed. Bags are not allowed within Pearl Harbor but bags can be checked upon entry and stored for $3.00.

There is no charge for a date change request of your reservation based on tour availability. Requests for refunds prior to 48 hours of your tour will receive a full refund minus a 10% cancellation fee. No refunds will be issued for tours canceled within 48 hours from the start of your tour.

*We will not operate tours to Pearl Harbor on December 7th due to ceremonies honoring the attack conducted on that day each year.≈ 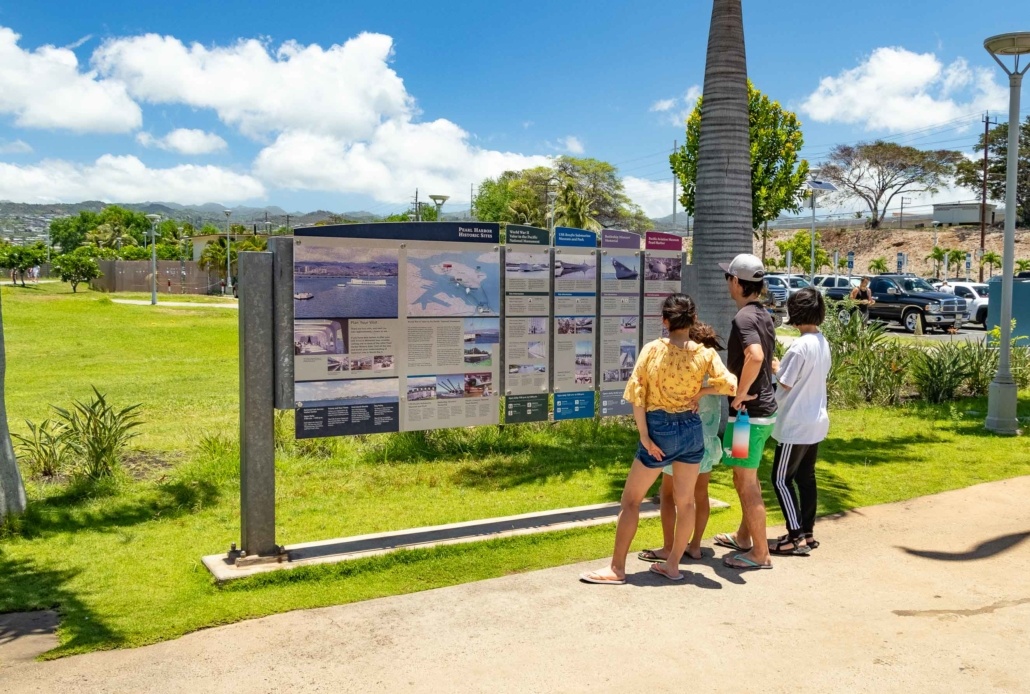 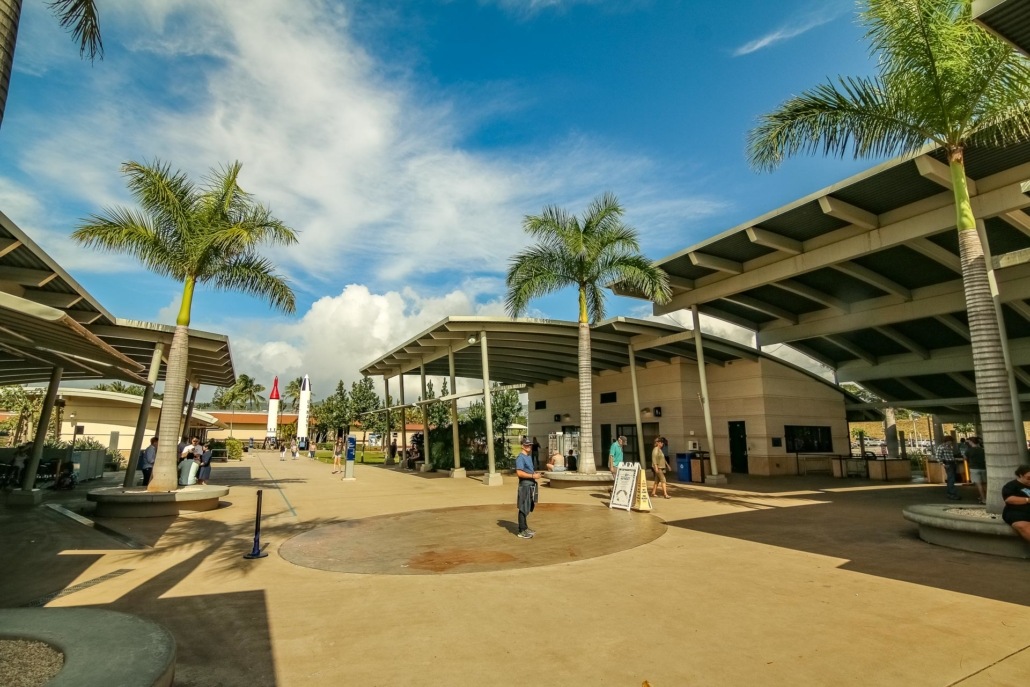 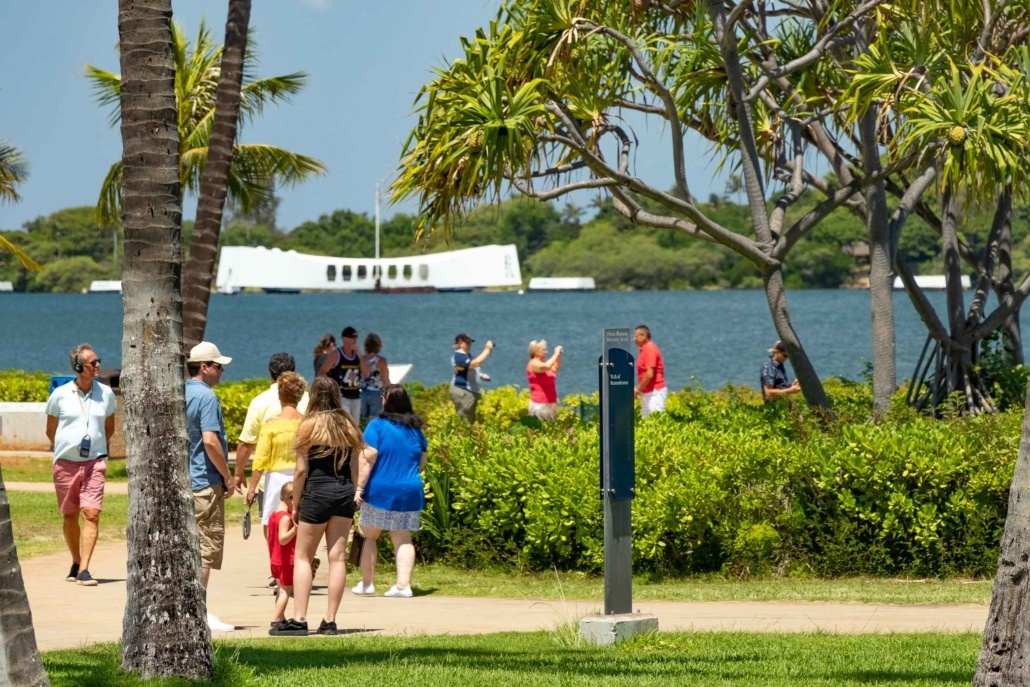 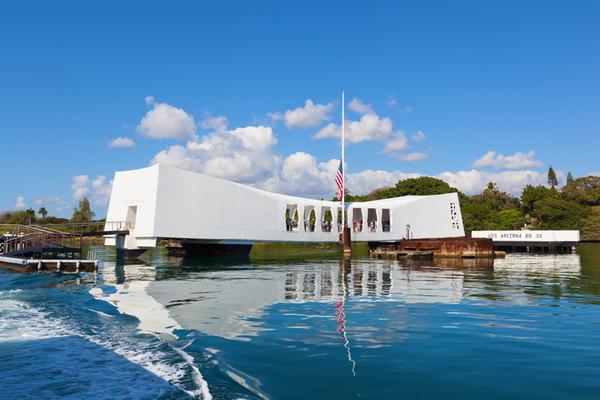 The visitor center is part of the Pearl Harbor National Monument. The buildings and grounds are filled with museums and informative displays of Pearl Harbor’s history and events during WW2.

Our tours to Pearl Harbor include a narrated audio headset or headphones to use with an official Pearl Harbor phone app. (a $7.50 value) Approximately two hours of narration in 9 languages (English, Japanese, Chinese, Korean, French, Russian, Italian, German and Spanish) is included.

Memorials to the fallen service members can be found along the water’s edge where visitors can spend some time learning about the events that launched America into WW2. Learn how the United States mobilized 130 million Americans and every major industry into a massive war effort that included 16 million service members enlisting, many of whom had never fired a weapon or traveled outside of their hometowns. 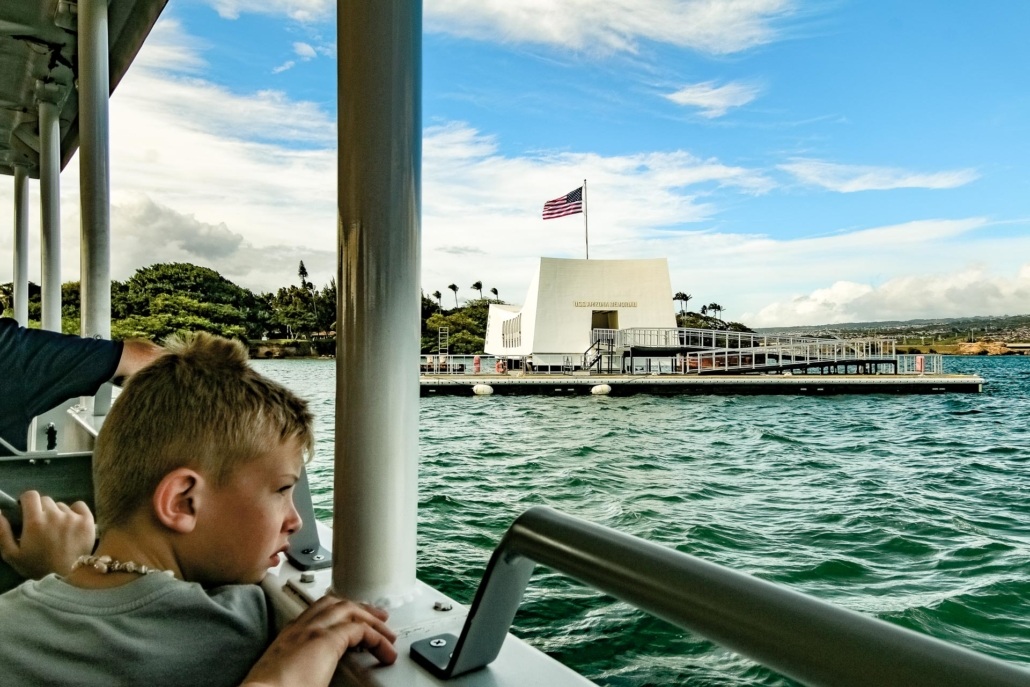 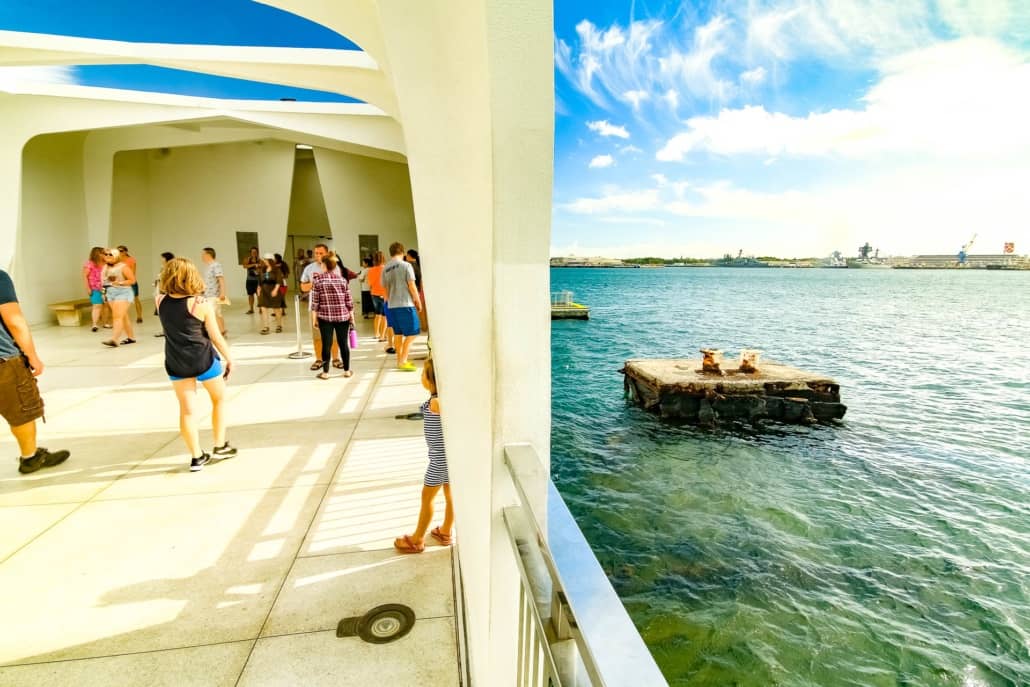 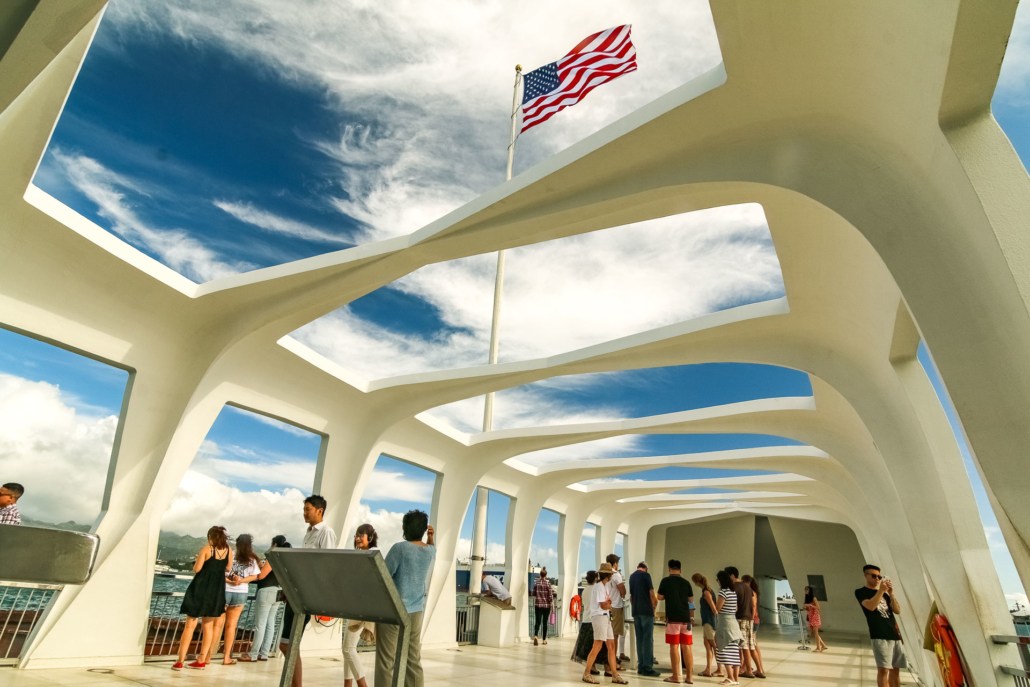 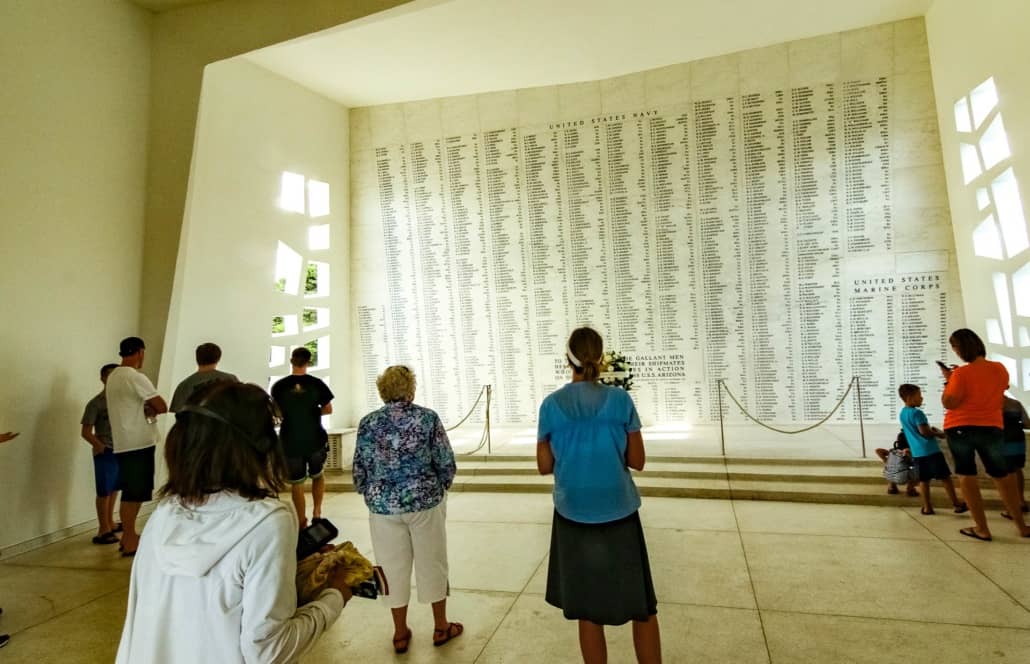 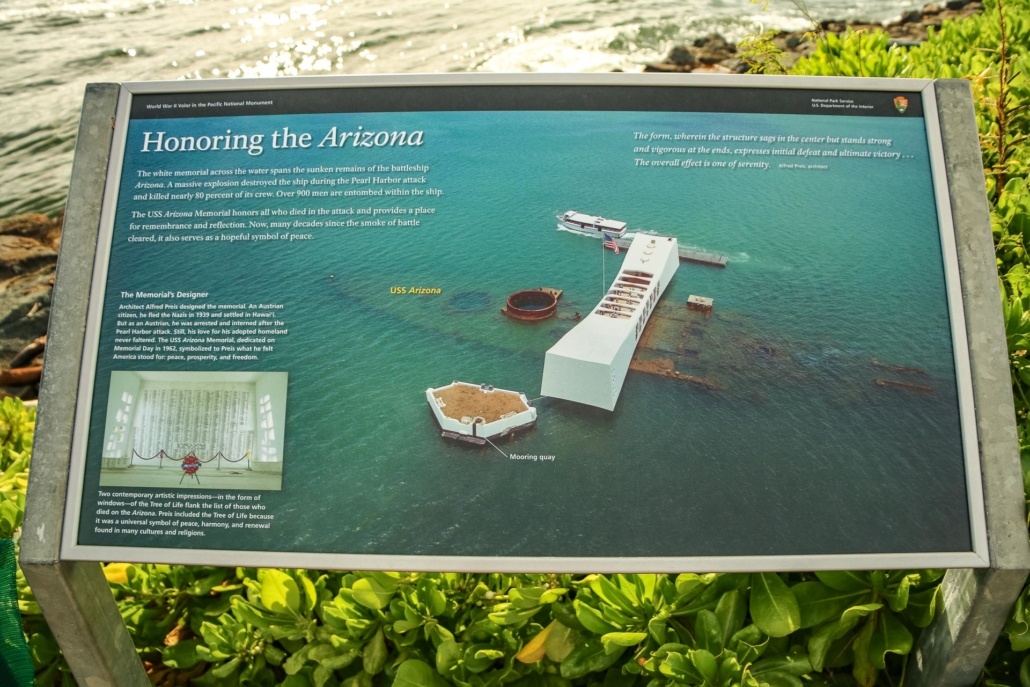 Arizona Memorial tickets are not included in this tour but can be acquired upon entrance to Pearl Harbor. A trip out to the memorial is a popular attraction for anyone visiting Pearl Harbor so guests on this tour should get in line for tickets upon arrival. Upgrade to the Complete Pearl Harbor Experience and transportation from Waikiki hotels is included along with USS Arizona Memorial tickets to assure these tickets are available. Guests will watch a short documentary of the Japanese attack and the events that led up to it before boarding a Navy shuttle boat for a short trip out to the Arizona Memorial along Battleship Row. 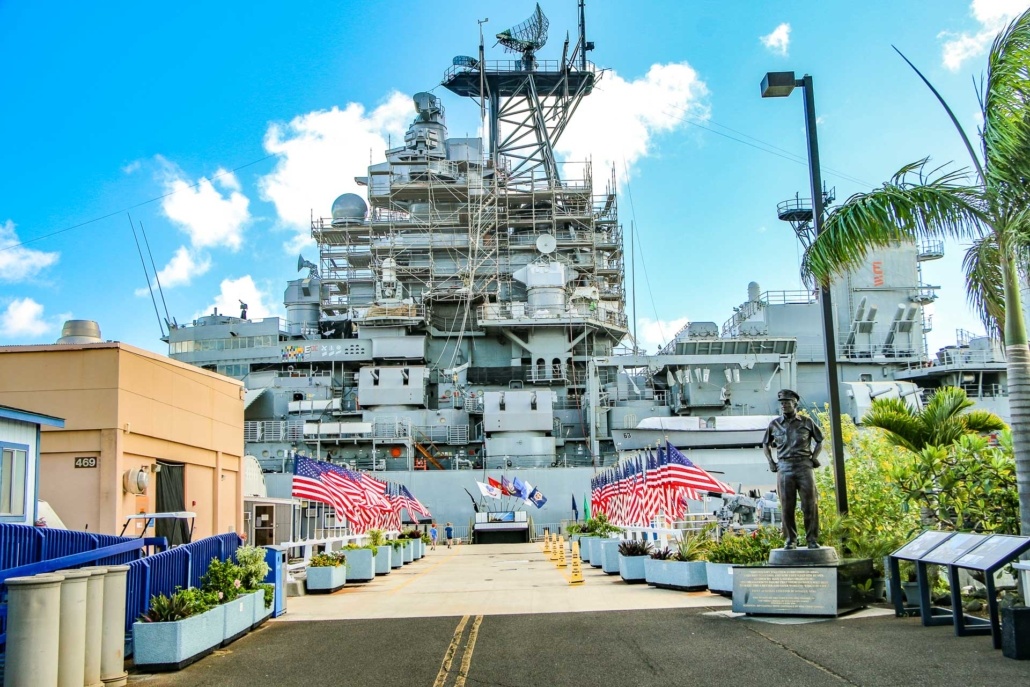 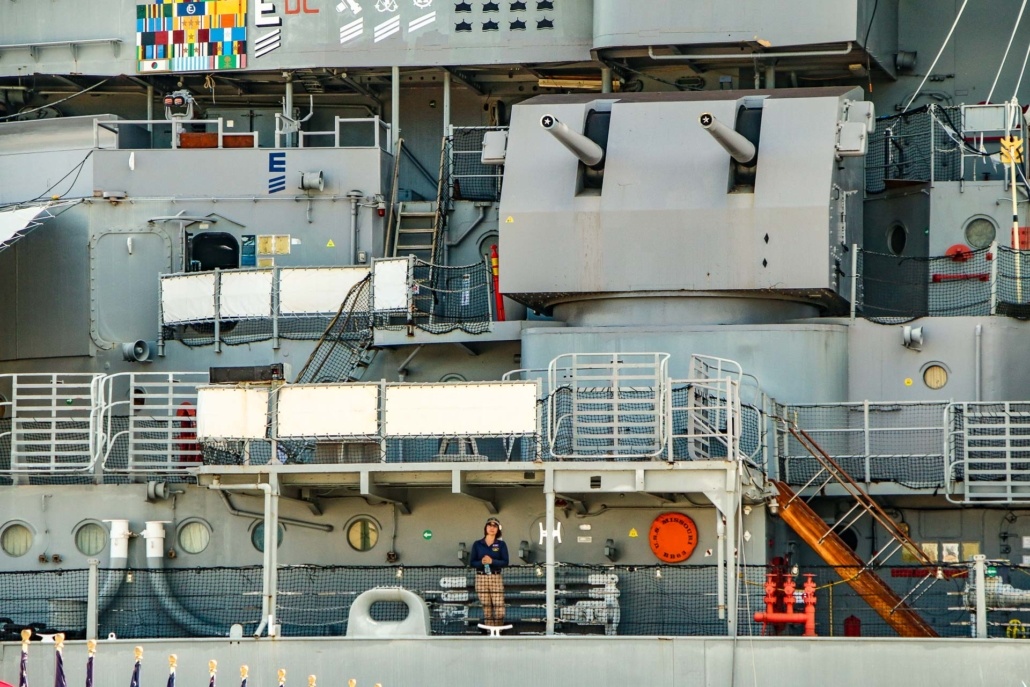 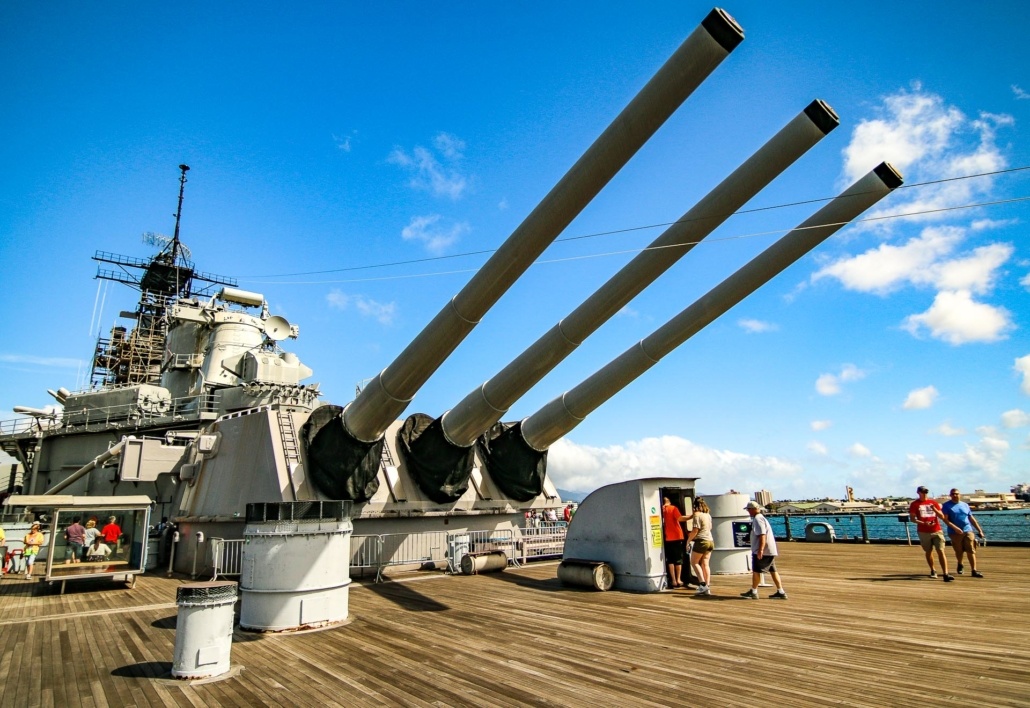 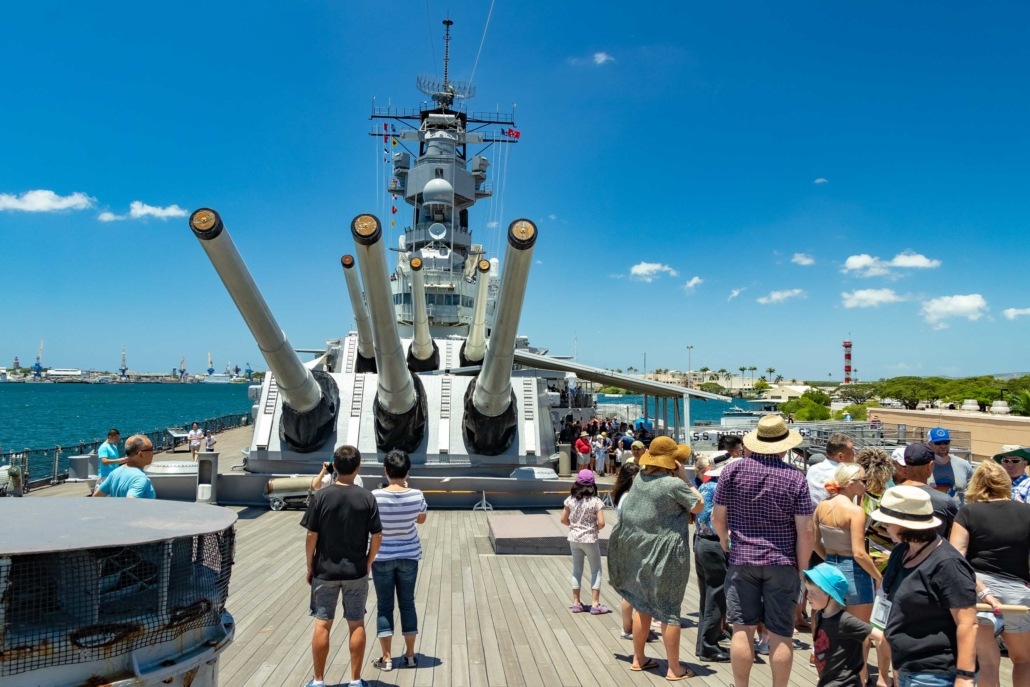 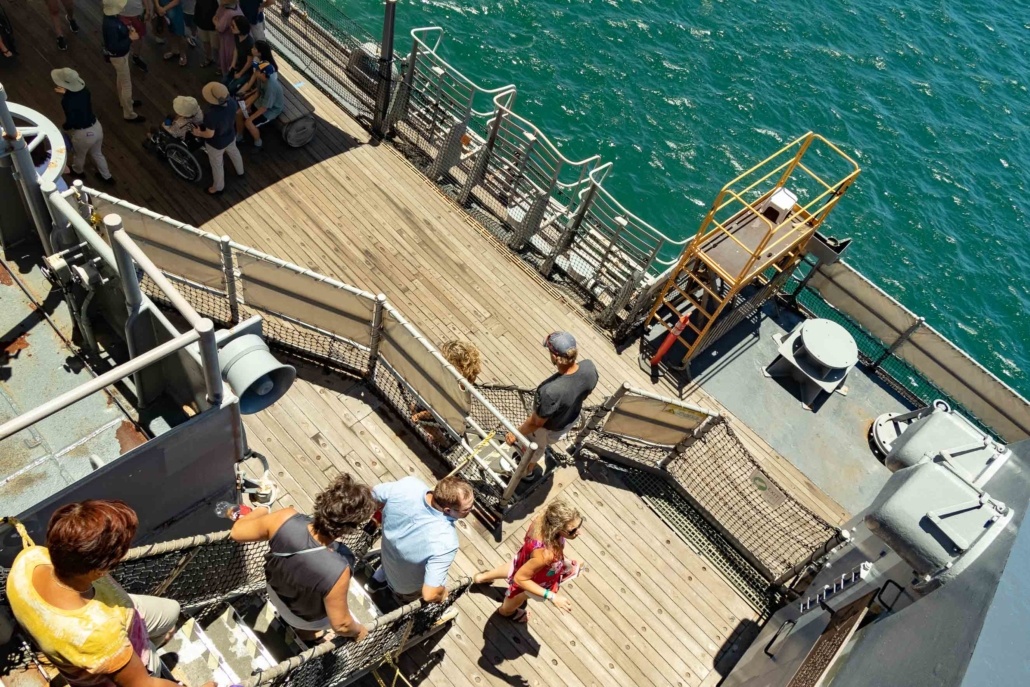 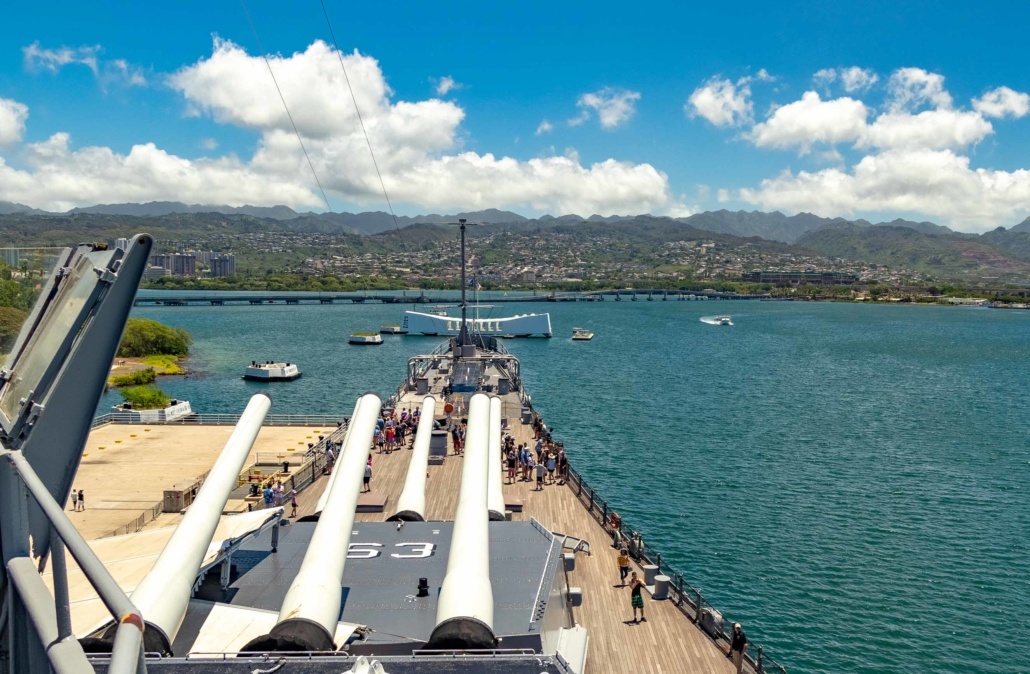 This massive battleship was commissioned in 1944 and would be the last battleship built by the U.S. Navy. It saw action In the final year of the war including support during the invasion of Iwo Jima, Okinawa and airstrikes on Tokyo. It was aboard the USS Missouri that the Japanese surrendered to allied forces in Tokyo Bay in September of 1945, officially ending WW2. The ship went on to fight in the Korean war and in support of Desert Storm operations in the early 1990’s. It has been a floating museum at Pearl Harbor since 1999. Guests can explore both above and below decks while learning about life aboard during WW2. 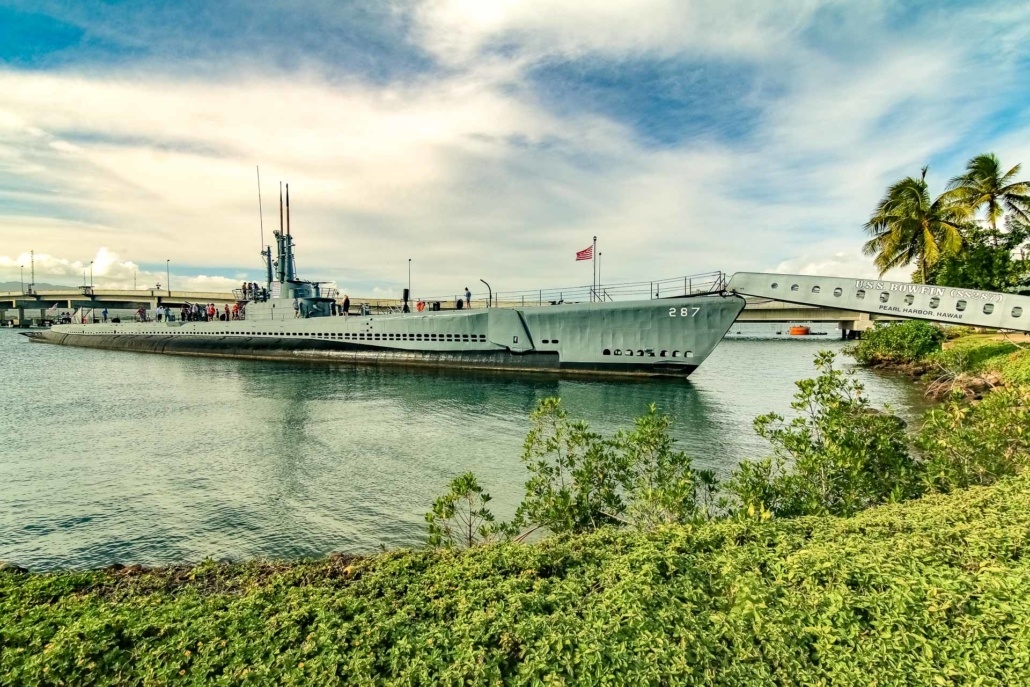 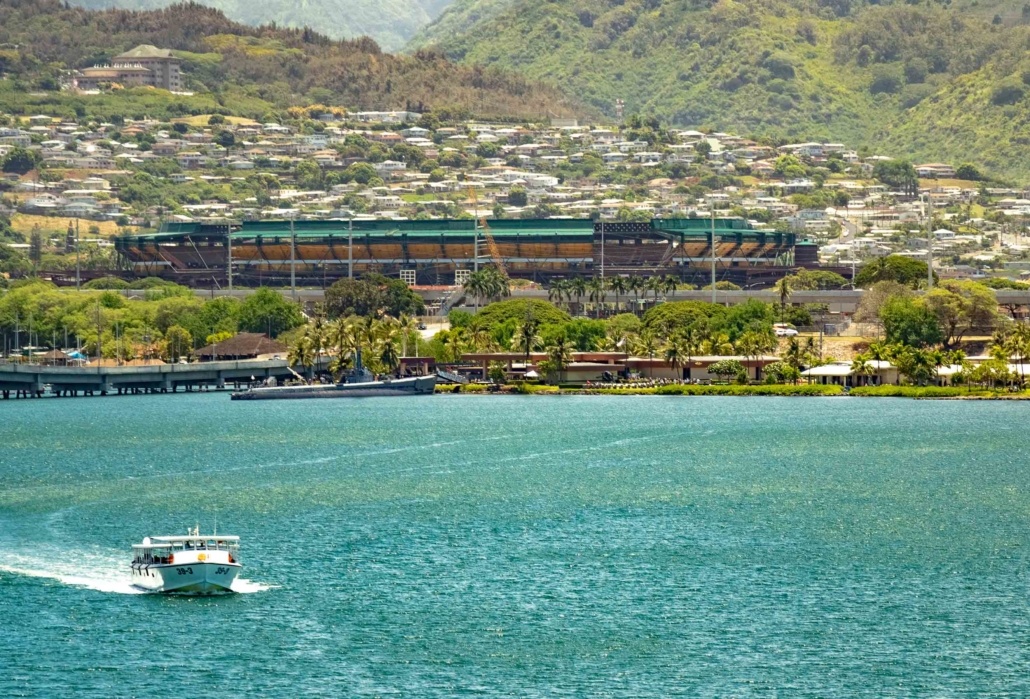 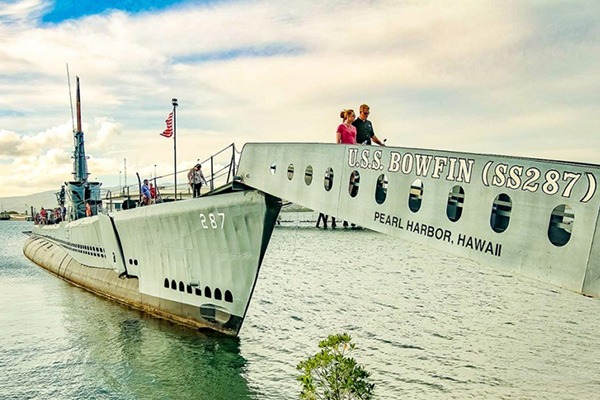 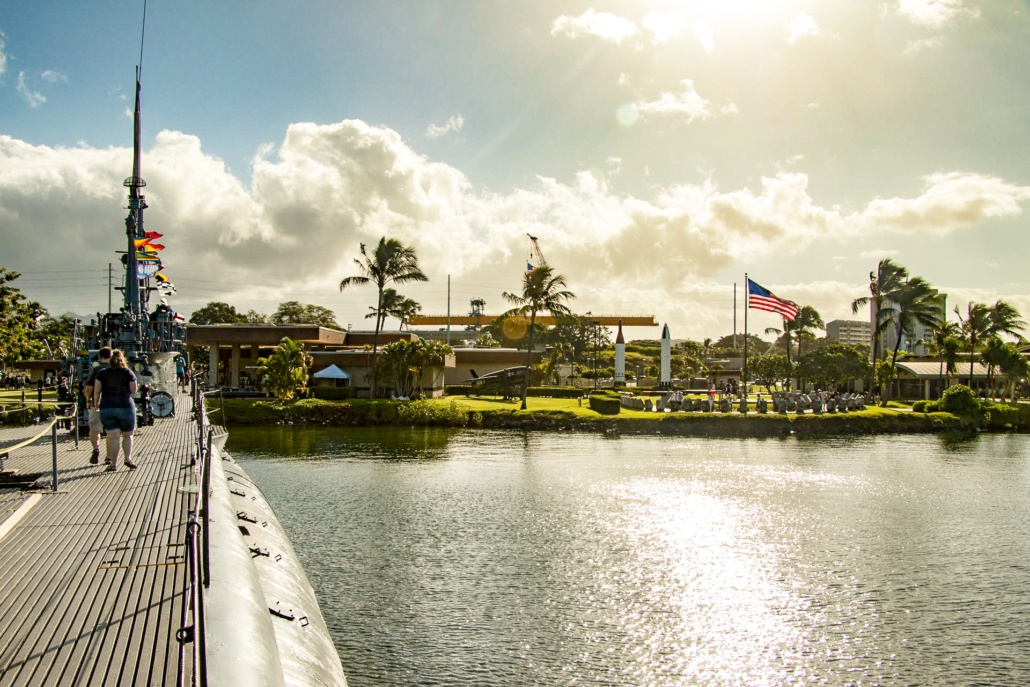 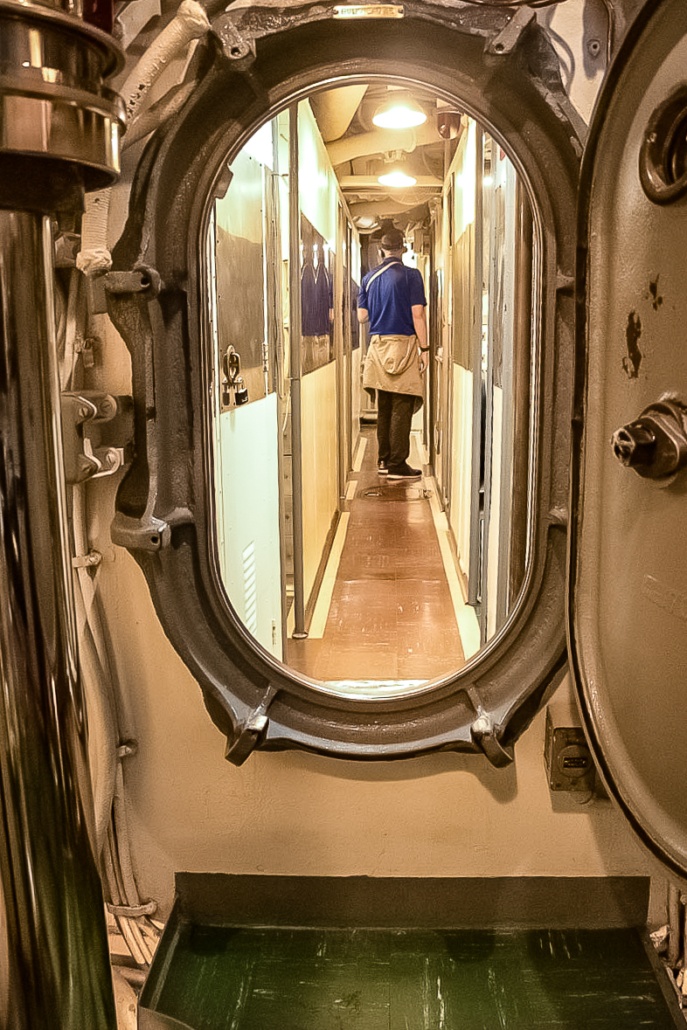 Guests can explore, inside and out, one of WW2’s most decorated fleet submarines – the USS Bowfin. After December 7th 1941 nearly every ship and military aircraft on the island of Oahu had been damaged or destroyed. This left the defense of Hawaii to the few ships not damaged during the Japanese attack, two aircraft carriers and the submarine fleet. Known as the U.S. Navy’s “Silent Service”, the U.S. Pacific submarine fleet sank thousands of tons of Japan’s merchant and naval ships, crippling the enemies supply lines and preventing them from mounting more attacks against Hawaii while the Navy and American industries rebuilt and added to the Pacific Naval Fleet.

Learn how they did it with National Park narrated headsets while strolling the deck, interior compartments and living quarters of the submarine. Continue this experience at the nearby submariner’s museum and memorial to the WW2 submariners on “eternal patrol”. 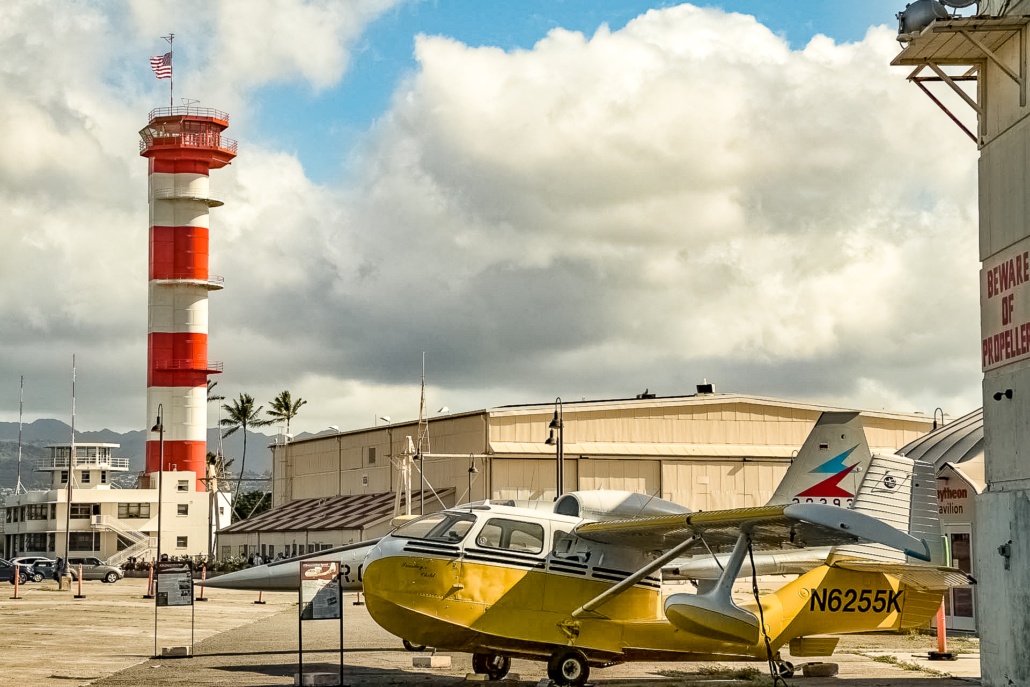 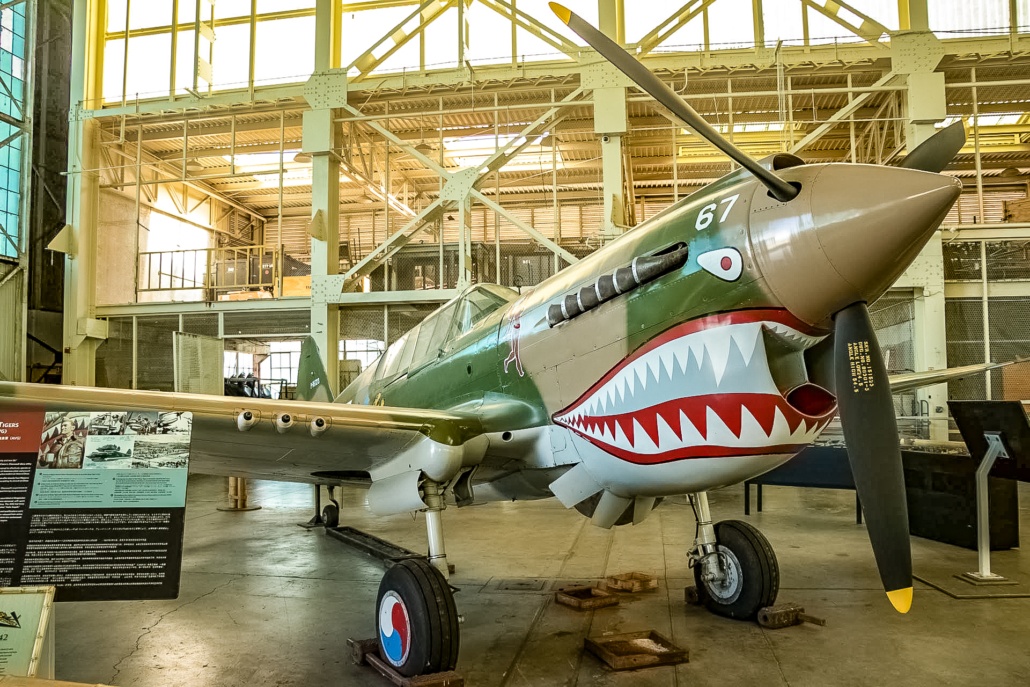 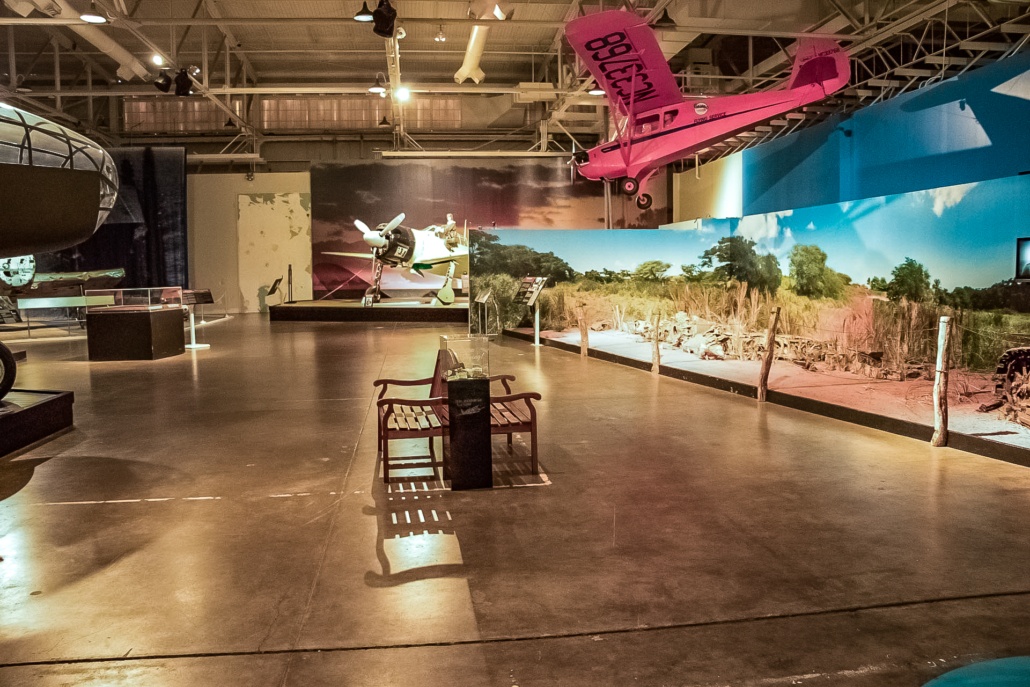 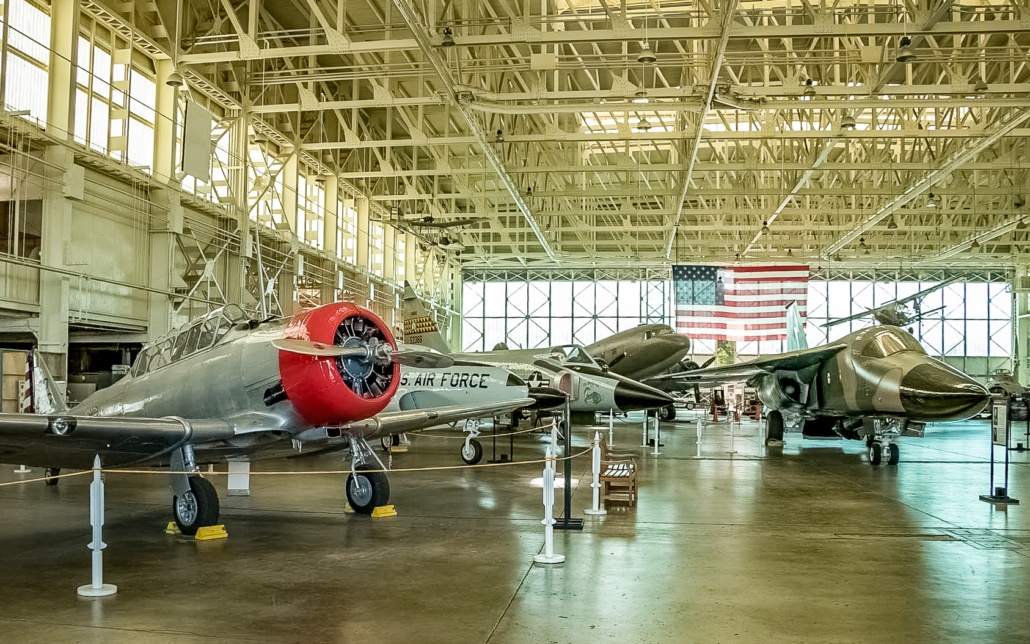 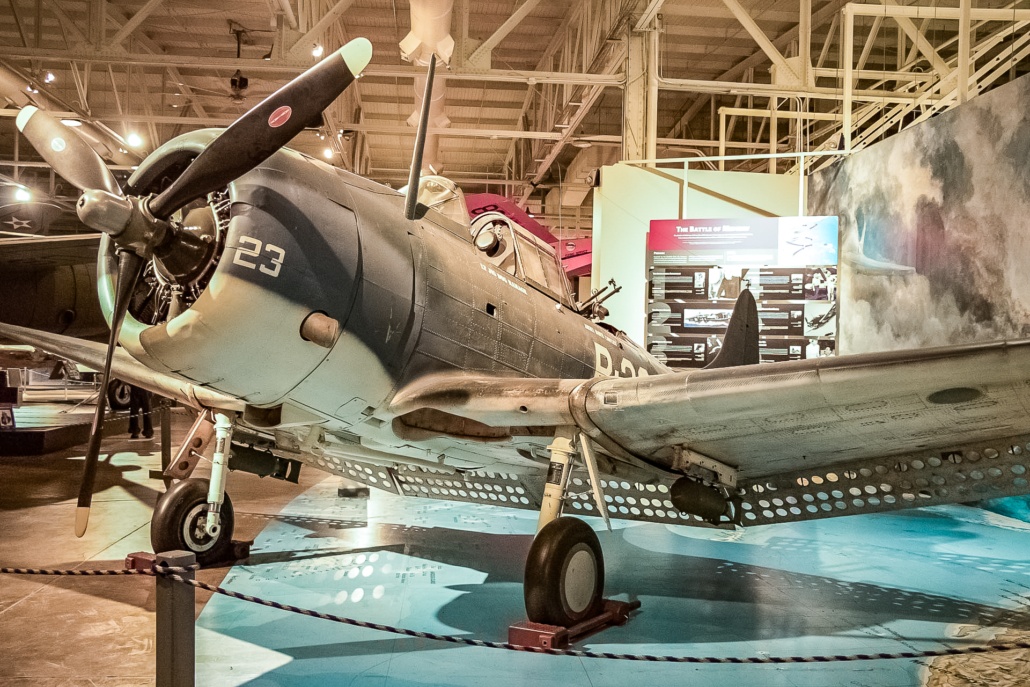 Located on Ford Island in the historic hangers bombed during the Japanese attack, this expansive aviation museum still bears the scars of December 7th, 1941. Vintage WW2 aircraft abound throughout some 120,000 sq ft of displays. The museum houses military aircraft from the last 80 years of combat including jets, seaplanes and helicopters used in the Korean and Vietnam wars. Browse the displays and murals depicting decisive WW2 battles fought in the air throughout the Pacific. Guests can even fly these vintage aircraft in the Flight Simulators for an additional fee. It’s an immense array of aircraft and interactive displays for the whole family!

Why Should I Visit Pearl Harbor While In Hawaii?

Pearl Harbor is an important part of world history. It brought the US into World War 2 in force and begun a bloody struggle across the Pacific against Japan. We use this as a reminder of what we lost and what we gained. Itʻs a sacred spot that if you have the opportunity, you should visit. It will move you.

What do concierge services include?

Our concierge services are designed to make your trip easy. We take care of everything from coordinating inter-island flights to reserving rental cars to booking the actual tours. We’re also available to answer any questions or concerns you may have during your trip.

What can I expect at Pearl Harbor?

A visit to Pearl Harbor is sombering, but powerful experience. Visitors can expect to learn about the history of the attack on Pearl Harbor on December 7th, 1941 through museum exhibits, memorials, a documentary, and more.

Are there things for kids to do at Pearl Harbor?

Absolutely! A Pearl Harbor tour is a great way for the entire family to experience the historic landmark. Children often enjoy the USS Bowfin Submarine and Park due to the hands-on nature of the exhibits and open are to explore. (However, please note that children under the age of four are not permitted on the actual USS Bowfin Submarine.)