Explore & Experience The Best Of Oahu From Waikiki

Best Things To Do & See in Waikiki

Experience The Most Popular Things To Do In Waikiki

Just the name Waikiki can easily conjure up images of its world-famous beach and balmy weather, which makes it a dream destination for anyone craving a tropical island experience.

A popular haven for surfers, Waikiki Beach is just one of six beaches in the district, along with Queen’s Beach, Kuhio Beach, Gray’s Beach, Fort DeRussy Beach, and Kahanamoku Beach. Waikiki is located on the south shore of Honolulu on the island of Oahu, which was once a retreat for Hawaiian royalty in the 19th century. Waikiki is translated in English as “sprouting freshwater”, and stretches from the Ala Wai Canal to Diamond Head on the east.

The city of Waikiki has always been associated with luxury, where the historic Moana Hotel still stands as the Moana Surfrider, which officially launched in 1901, making it the first-ever hotel in Waikiki.

In addition to Waikiki’s spectacular beaches, shoppers will delight in discovering world-class designer brand stores, which line Kalakaua Avenue, along with restaurants and activities found all along Kalakaua and Kuhio Avenues. This is where you will see places like the Royal Hawaiian Center, Waikiki Beach Walk, and International MarketPlace. Nearby is Ala Moana Center, the ninth largest shopping mall in the United States and the largest open-air shopping center in the world.

There is no shortage of fun after dark when Waikiki transforms into the city of lights, offering amazing hula shows, live music, fine dining, and waterfront cocktail bars.

Transportation Available For Most Activities From Waikiki

Join us for an unforgettable tropical island vacation, where you can indulge all five senses Hawaii-style. We offer incredible tours of Oahu’s most popular activities by land, ocean, and sky – whether you’re traveling solo or part of a small group. We are here to help you plan that much-needed vacation to recharge your mind, body, and spirit. A complimentary hotel pick-up is part of our guided tour service. 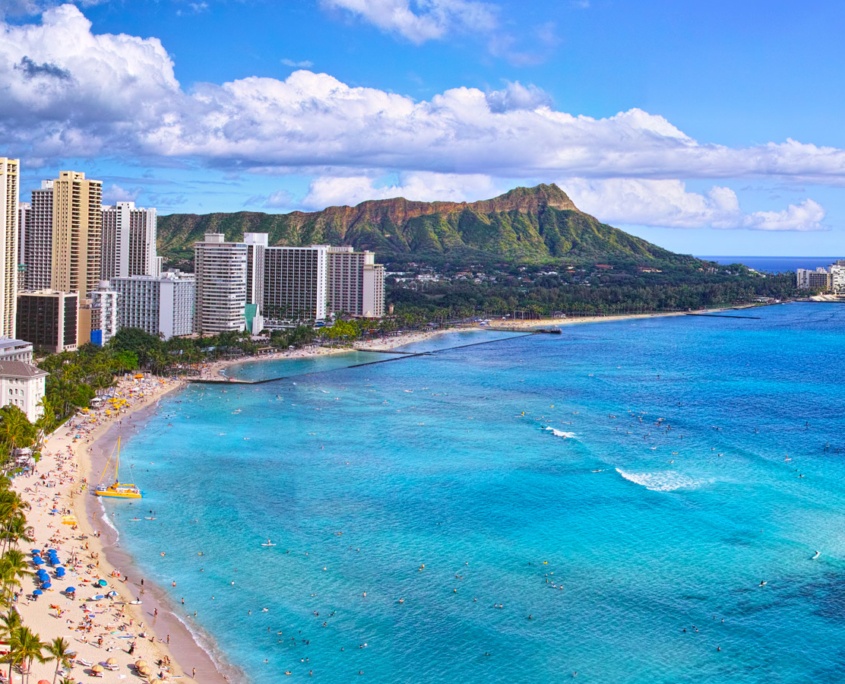 Waikiki Best Things To Do & See

Legendary Hawaiian Duke Kahanamoku, an Olympic gold medalist swimming champion back in 1912, was raised in the area where the Hilton Hawaiian Village now stands. He spent his childhood swimming and surfing the waves in Waikiki. He used wood from a Koa tree and designed it after the old boards of ancient Hawaiians. He called his surfboard, “papa nui”, which is Polynesian for “big papa or “big place”. Duke introduced surfing as a sport to other countries such as Australia and brought it to Santa Cruz, California, where surfing first became known on the US Mainland. Originally, surfing was only known to native Hawaiians, which is why he was known as the surf king. Today a statue of historical significance is erected in his honor at Kuhio Beach.

We may request cookies to be set on your device. We use cookies to let us know when you visit our websites, how you interact with us, to enrich your user experience, and to customize your relationship with our website.

Click on the different category headings to find out more. You can also change some of your preferences. Note that blocking some types of cookies may impact your experience on our websites and the services we are able to offer.

These cookies are strictly necessary to provide you with services available through our website and to use some of its features.

Because these cookies are strictly necessary to deliver the website, refusing them will have impact how our site functions. You always can block or delete cookies by changing your browser settings and force blocking all cookies on this website. But this will always prompt you to accept/refuse cookies when revisiting our site.

We fully respect if you want to refuse cookies but to avoid asking you again and again kindly allow us to store a cookie for that. You are free to opt out any time or opt in for other cookies to get a better experience. If you refuse cookies we will remove all set cookies in our domain.

We provide you with a list of stored cookies on your computer in our domain so you can check what we stored. Due to security reasons we are not able to show or modify cookies from other domains. You can check these in your browser security settings.

We also use different external services like Google Webfonts, Google Maps, and external Video providers. Since these providers may collect personal data like your IP address we allow you to block them here. Please be aware that this might heavily reduce the functionality and appearance of our site. Changes will take effect once you reload the page.